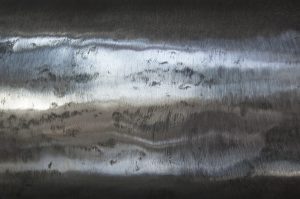 A strong anomaly assessment methodology will use its failure mechanism to develop a model that using relevant data will predict the likelihood of it’s failure. This statement will be used to identify weaknesses in many dent assessment methodologies and propose improvements.

Dents identified through ILI have proved to be stable at operation pressures but are more susceptible than the undamaged pipe of developing cracking that can grow to critical size causing failure. In other words, dents are primarily a fatigue problem.

A dents lifecycle can be broken into three parts.

First, an indenter deforms the pipe and then the size of the dent decreases through a process called ‘shakedown’ until it reaches a stable size. Plastic deformation decreasing the pipes ductility and consuming the fatigue life at the dent occurs during this process.

Third, given enough time a fatigue crack will form at the dent. Crack growth will be driven by pressure cycling magnified by the stress concentration until the crack reaches a critical size and fails typically due to pressure loading.

An effective dent assessment needs to consider this life cycle.

Neither depth nor orientation are significant causative factors in the length of a dents life cycle and therefore are not good predictors of remaining life. Although there is some correlation between depth and the amount of stress concentration the sharpness is a more robust predictor than depth alone.

1) the amount of damage that occurs during dent formation and shakedown,

2) the amount of stress concentration due to a deformed shape, and

3) the amount of pressure cycling the dent is subjected to.

The good news is that data is typically already being collected on two of the factors: dent profile and pressure cycling.

High resolution ILI caliper tools are very capable of collecting geometry data that is of sufficient quality to perform strain or stress based analyses of the dent. The geometry data can be used to create either Finite Element Analysis (FEA) models to determine the stress concentration or numerical modeling to determine strain levels. Either strain or stress are good predictors of the severity of the dent but stress concentration lends itself better to a remaining life prediction as part of a fatigue analysis.

Pipeline SCADA systems have historians that are already collecting and storing pressure data on the pipeline that can be used as part of a dent fatigue analysis.

The missing piece is the amount of damage that occurred during dent formation. This can be analyzed using elastic plastic FEA where the final dent size is taken from the geometry ILI and initial dent size and is iterated through shakedown until they match. But the remaining life analysis can avoid the issue by using an assumption in one of two approaches.

The first approach is to assume an initial damage amount and then analyze the life cycle of the dent using an SN based approach with the stress concentration factor determined by elastic FEA and apply operational pressure cycles.

The second approach is to assume that a small crack has occurred on the dent and then model the crack growth using the same stress concentration factor and operational pressure cycles.

One reason why dent depth and orientation have been used as assessment criteria is that they are readily available and easy to apply even if they are not robust predictors of dent severity. But switching to a modern dent assessment procedure can be made easier by developing screening procedures and leveraging data that is already being collected.

A series of acceptance criteria using spreadsheet data such as sharpness, defined as dent depth divided by its length, and any non-traditional shapes identified during data analysis, and the presence of welds or other damage types. Regulatory compliance is managed during this step.

As the failure mechanism for a dent is fatigue based, it is best practice to repair all dents left in service with a method that will provide constraint. Depth and orientation based criteria should not be used in repair decisions as they do not consider the life cycle assessment of a dent.

Let our expertise work for you.

Integrity without knowledge is weak and useless, and knowledge without integrity is dangerous and dreadful